Dr. Abbie Vandivere '97 (Groves), who is currently working as a paintings restorer/conservator at the Mauritshuis in the Netherlands, recently took time to connect with Rhodri Samuel, Senior Master & Director of Alumni Relations and Harriet Klumper '09 (Renfrew), Advancement Associate. In Dr. Vandivere's current work she is the lead on a team of scientists that examine the iconic "Girl with a Pearl Earring." In 2020, Abbie was featured on the cover of the Dutch feminist magazine Opzij, and was nominated–and made it to the final three–for the Dutch "Women in the Media" awards for 2020.
In her time at Shawnigan, Abbie focused on science and arts, played rugby and ran track, and spent much time in the Hobbies building. Aside from her many contributions to the school, her teachers and classmates also remember her for carrying her pens to class in a yellow plastic bucket.
HK: To start off, during your time at Shawnigan who were some of your most influential teachers?

AV: There were so many influential teachers at Shawnigan, but Mr. [Don] Rolston definitely has been an influence through my life. I think it boils down to the fact that he was so passionate about art, and so chill and nice. He reminded me of Bob Ross. I really felt a great bond with him: he took things very seriously with art but then inspired everyone to be creative and explore any sort of materials. This sort of exploration of materials is something that I have carried with me in making art but also in understanding art. It has really stayed with me with my teaching as well. I sort of hear Mr. Rolston in the back of my head. 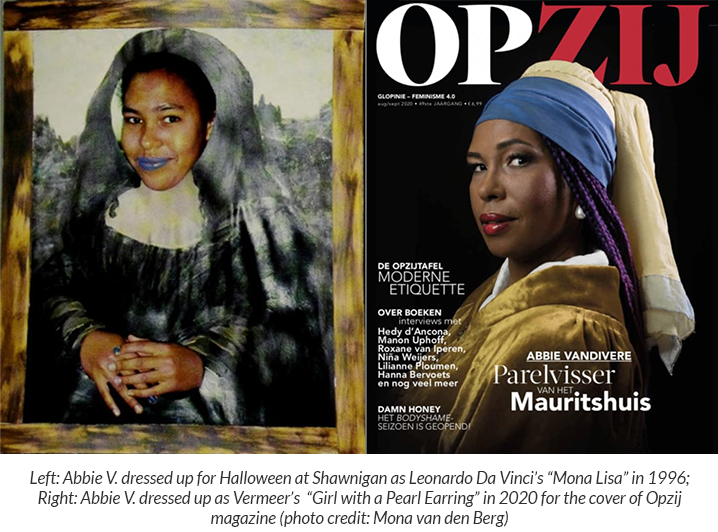 Mr. [Stephen] Lane as well, I did a lot of photography. For whatever reason, I didn’t choose art as an activity, because I felt like there was so much art in my life. The photographic skills and observations I learned from him really helped me in my career. Also he was just such a great guy, and passionate about his work. I mean I could say that about so many teachers at Shawnigan, but the ones in the art and hobbies really stuck with me the most.

RS: You left here and went to Princeton didn’t you?
AV: I did!
HK: Did I read that you went there for dentistry?
AV: Yeah! When I was at Shawnigan I was convinced that I wanted to be a dentist. I was into science and arts, and I thought that by combining those two: aesthetics and a steady hand, that dentistry would be perfect. But when I was at Princeton the road changed, and having to take lots of subjects helped me realize I could combine art and science in a completely different way. Art conservation was something I had never heard of or considered, but I was just so thrilled about it as a possibility. I called my parents that day and said “I’m not going to be a dentist anymore!”
RS: That’s a good story actually. You had to take a lot of courses and this one struck a chord with you?
AV: That’s right, at Princeton I had to take a mandatory course where we went around the university’s art museum, and Princeton University has a world class art museum!
We got to find out what everyone around the museum did, from the registrars to the secretaries, to the curators, to the conservator. And as soon as I entered that conservation lab and saw all the microscopes and the equipment, and this big Italian altarpiece there I thought “Wow, this is where I want to be.”
RS: Fantastic.
HK: So I have heard great stories about the yellow bucket…
AV: [Holds up yellow bucket]
HK: There it is on screen! Did you have any favourite memories from your time at Shawnigan?
AV: There are so many things, I’m sure when you ask people that question Ski Week looms large. Ski Week was the best experience in so many ways.

But I guess the more “academic” answer is the moment when the new Hobbies building opened. In my first year there, art and photography were squished up by where School House was in Main Building and the facilities weren’t that good. But then suddenly there was this huge new building, with woodwork (which I was also really into), along with photography and art and I thought “this is my place!” A lot of my favourite memories are hanging out in there, and other artsy people would come in every so often, but a lot of the time it was just me there. I would blast the music over those speakers and had a great time. 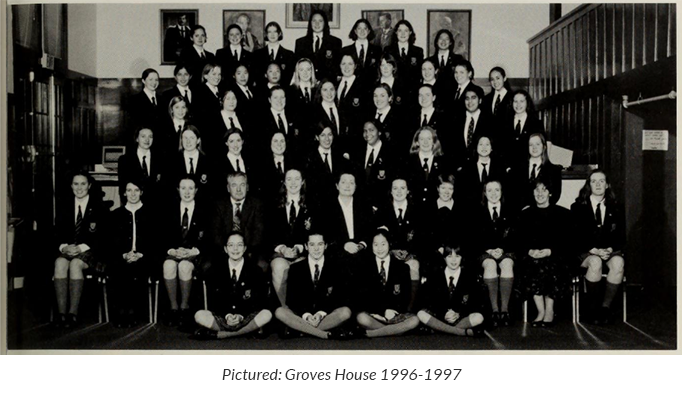 My other favourite memory is just hanging with the Groves house girls, and just the really strong friendships and bonds that we made there. I’m still in touch with all of these people, and it’s amazing to hear how many of them have ended up in your Board of Directors and really connected with the School. We had a really good cohesive group in that year.

RS: Was it Ms. [Sue] Newns?
AV: Ms. Newns! Yes, poor Ms. Newns. We drove her nuts, but I think about her often too.
HK: One of the other questions we had was in what ways did your Shawnigan experience shape your life after? I know you touched on that with your experience in art and science. 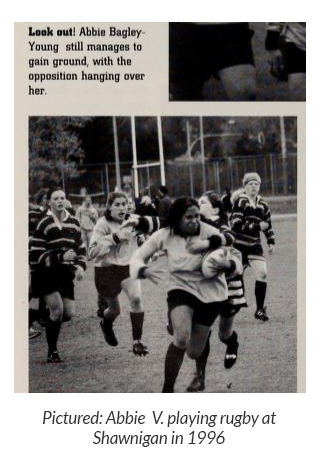 AV: I guess for my eventual career and academics. I really valued the equal emphasis on sports, activities, and academics. In different parts of my life, those three things have been so important in different ways. I hope that every student takes advantage of that balance because I’m sure that there are plenty of schools that are more academically-focused, or very sports-focused, or very artsy in another way; but the combination is what helped me.

Boarding life made me independent and self-sufficient from an early age. Also, it really allowed me to be myself. I'll bring up the yellow bucket again: this is the kind of thing that kids in most schools would be made fun of for! But I was just someone who could be who I wanted to be, and no-one had a problem with that. Other students may have had slightly different experiences, but I felt like it was a community that was very accepting. Everyone was a little weird in their own way, and that jived with me. They were just so passionate about the different things that they did, and the different things they were bringing to the table. The hope is that you could just be yourself, and that really shaped my life.

HK: What is the best advice you’ve ever received?
AV: Okay well this is where Ms. Newns comes in again. In the common room in Groves, she had a poster of the poem “Desiderata'' by Max Ehrmann. It had some really good things in there like “Enjoy your achievements as well as your plans. Keep interested in your own career, however humble; it is a real possession in the changing fortunes of time.” I would stare at that poster thinking “When is this house meeting going to be over?”. But parts of it really stuck with me.

HK: I’m sure Ms. Newns would be thrilled to hear that the poem stuck with you.

AV: Another quote she had that always stuck with me was when you were stressed or things were overwhelming, just say to yourself: “I am a calm, strong person and I can do this.” I know that the other Groves girls, if we were going into an interview or stressful situation we would joke “calm, strong person, you can do this.” Ms. Newns was full of great quotes.
HK: What has your experience been as a woman in the art world? It is a very female industry, but women–and more specifically women of colour–are still lacking representation in some of the most senior leadership positions.
AV: You’re right, a lot of women work in the art world. You see it in the Bachelors and Masters level art history classes, some of which I teach: the vast majority are women. I wonder whether art conservation has the perception that it appeals to women because requires care for artwork, sensitivity and patience; but I don’t think that’s true. I think that it’s that women especially find it hard to find a path in the sciences that feels true to them. Maybe by combining it with art, that really attracts women to it. I work a lot with scientists, most of them men. Speaking the language of science and the language of conservation really transcends all of those things.
Still, the highest positions are often occupied by men, and that is a problem. That's something that is going to be changing in the next while. When 90% of the people in these fields are women, but the other 10% are in the highest positions as heads of department, there’s no good reason why that should be the case.
HK: Is there a female role-model, not necessarily at Shawnigan, who influenced you significantly? 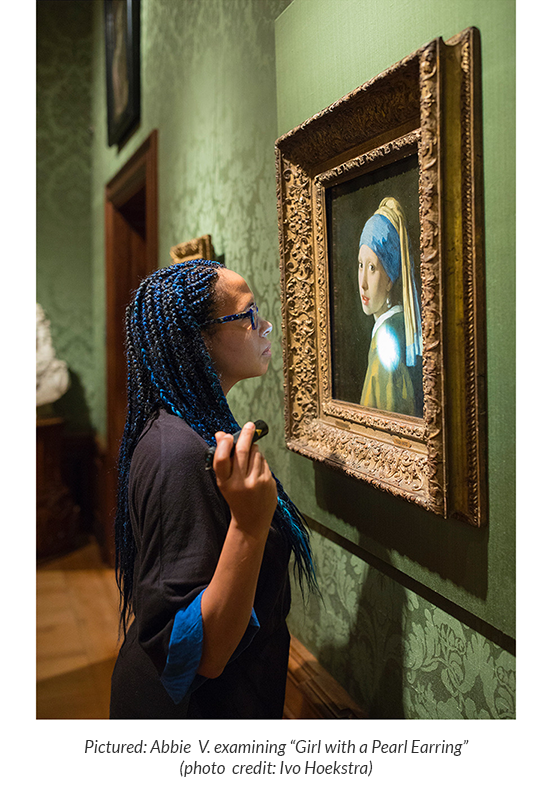 AV: Because the art conservation and art history field is so full of women, all of my role models have been women. I can’t narrow it down to just one. From my teachers, mentors, colleagues, they all really helped me to get where I am, and we all help each other. It’s a very open field of sharing information and sharing knowledge.

People might assume: “Oh a bunch of women working together, there must be some kind of competition among them”. There isn’t! We’re professionals, who have worked hard to get the few jobs there are out there in conservation. There’s no need to be clawing at everybody to get where you are. I’ve found it to be very supportive.

To bring it back to Shawnigan, living with a group of girls at the time also equipped me for working in a workspace with women.

HK: On International Women’s Day, what would you share with young women thinking about their careers?
AV: It’s something I’ve touched on already, but follow your passions. Keep your options open. I was so sure that I wanted to be a dentist when I was at Shawnigan, but by having all of these different varied activities, sports, subjects we had to do, I was prepared for anything. I got to university and I could follow all these paths. Don’t restrict yourself too soon to what you think you should do; leave your options open to what you want to do.