In this edition, we are highlighting Shawnigan alumni who mentor or collaborate with other alumni, and we hope this inspires you to consider ways you can champion your fellow alumni. Our community is always strongest when we support each other.
Lisa Grover ’90 (Kaye’s) and Annika Belireau ’19 (Strathcona) 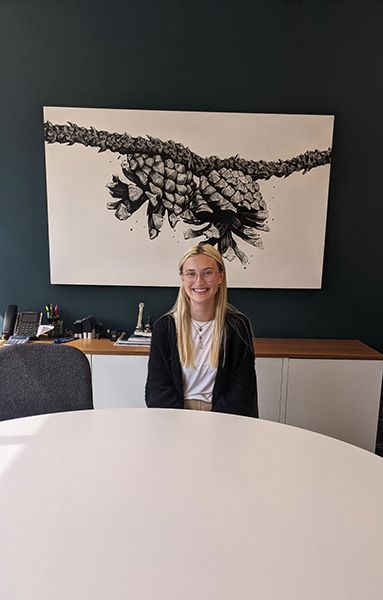 Annika B. at the Banff office of Grover-Froese.

Lisa Grover '90 shared the following about working with Annika Belireau '19, who was an intern at her law firm this summer:

"Grover-Froese, a law office in Banff and Canmore, Alberta, had the pleasure of hiring Annika Belireau '19 as a summer intern. Annika is interested in pursuing a career in law and Grover-Froese was delighted to have her on board for the summer. With her keen interest, Annika brought her dedicated work ethic and creative solutions to our firm. I encourage all alumni to consider hiring a young Shawnigan graduate, and I thank Annika for her dedication. We hope to see her at our office next summer."
Fiona Dalrymple ’03 (Renfrew) and Keilen R. ’22 (Groves’) 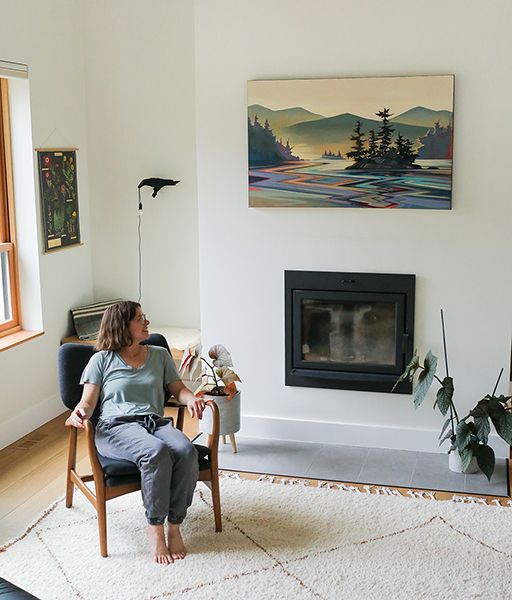 “The last few years have been wildly unpredictable: I became a mum of two, I completely changed careers, and we began building our new home and business space. Throughout all of this, I painted. I thought back to my much anticipated fine art afternoons and found the courage to share my work with others through social media and, gradually, my website. My business grew along with my passion for painting the west coast and my husband (who I already recruited for my business) and I realized that we needed extra help this year.

Our friend, senior art teacher at Shawnigan, Vikki Agate, recommended a summer student placement. We reached out to Keilen, a Grade 12 student in Groves' House, who quickly became an important part of our workflow due to her enthusiastic, ready-for-anything attitude. She helped with social media, client communications, varnishing, packaging and hanging with our little girls.

We are excited that she plans to find time throughout her school year to help us during our busy seasons.”

To see more of Fiona’s work visit her website at: www.fionadalrymple.com
Ed Steidl ’91 (Copeman’s) and Chris Borkenhagen ’86 (Lake’s)
Ed Steidl ’91 (Copeman’s) recently left Microsoft and joined AuthenticID, a Seattle based technology startup company that provides technology solutions for identity proofing. The power of the Shawnigan network is evidenced by Ed’s connection to a fellow alum, Chris Borkenhagen ’86 (Lake’s), who is the Chief Operating Officer of the company. Ed and Chris met at a Shawnigan event in the Seattle area 10+ years ago and have been good friends since.

Both Ed and Chris have been working in the Seattle technology space for over two decades. “Chris and I have been looking for ways to work together for years,” mentioned Ed. “We just couldn’t align on the right opportunity.” The two started talking about AuthenticID several months ago, with conversations moving quickly after the company announced a 100M USD private equity investment.

“Working with a fellow trusted alum helps the candidate sourcing process move quickly… a key necessity in a rapidly scaling company like AuthenticID," said Chris. “You know that, foundationally, the work ethic and discipline are apparent and that you can inherently rely on someone that went to Shawnigan to deliver results.”

Head’s Summer Travels Connecting with Alumni
Head of School Larry Lamont, his wife Kathini, and their daughter Poppy took to the road this summer to explore northwestern BC and in doing so, they had the opportunity to connect with a number of Shawnigan alumni. They first met up at the Heritage House in 108 Mile House with Sandy Foster ’60 (Ripley’s) and his wife Wendy (pictured below). 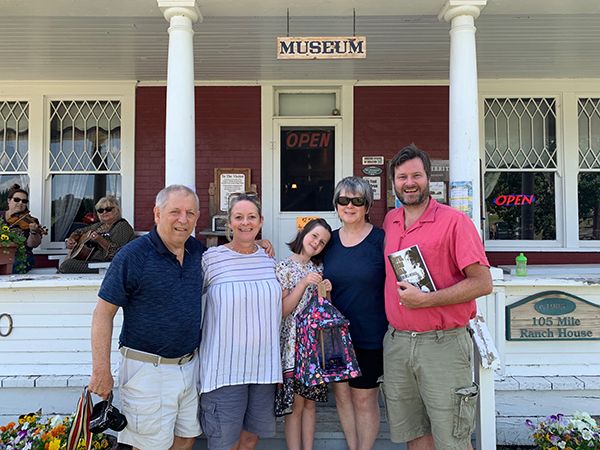 The Lamonts then met up with Kristen Brewer ’02 (Renfrew) and her son Killian in Smithers (pictured below). 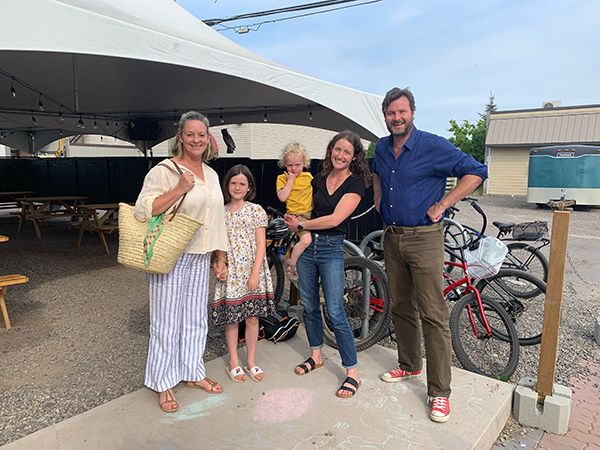 After meeting with Anna Williams ’18 (Groves’) in Masset, the Lamonts also had the opportunity to reconnect with Peter ’97 (Lonsdale’s) and Terekau ’98 (Lonsdale’s) Houston, who took the Head and his family fishing off the coast of Haida Gwaii to cap off an alumni-filled discovery of northwestern British Columbia. 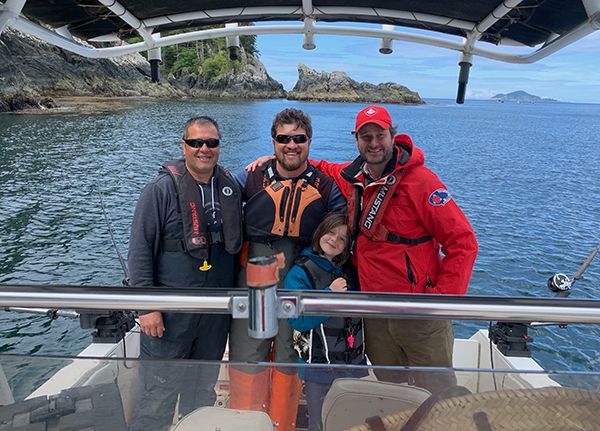 Alumni at Haida Gwaii Community Event
From August 6-8, Shawnigan's alumni community on Haida Gwaii reunited to celebrate the reopening of the Willows Golf Course under new owner and past Shawnigan parent Andrew Purdey. In attendance for the golf tournament, fishing derby, and evening feasts were the Houston, Jones, Plater, Purdey, and Williams families, along with Head Larry Lamont and a contingent of Shawnigan staff. A wonderful time was had by all and connections were re-established with a community where Shawnigan roots date back to the 1980s. Thank you to all for attending and supporting this community event! 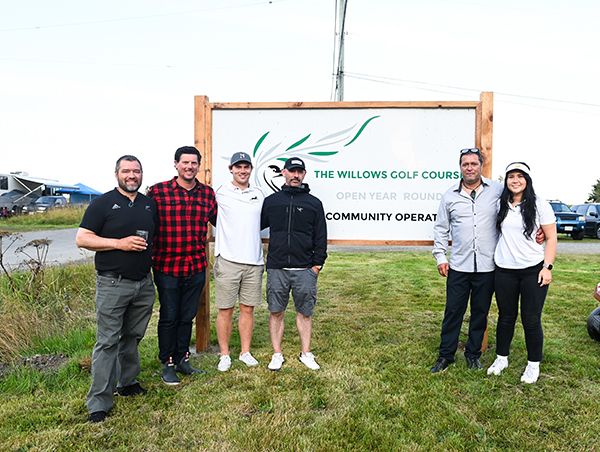 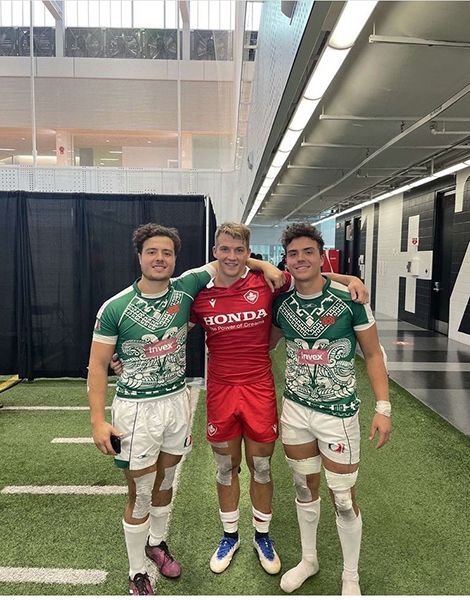 Over the weekend of September 18-19, the World Rugby Sevens Series was welcomed back to BC Place in Vancouver in a pared-down event. Some of our staff and alumni were in attendance and watched as the young Canadian men's team began their journey to the Olympics with a sixth-place finish on Sunday.

Adding to the excitement of the event, three of our young Shawnigan alumni played in the tournament. Ciaran Breen '19 (Lonsdale's) played for the Canadian team, making some impressive runs, tackling well and scoring a wonderful try in his last game. Patricio ’17 (Ripley’s) and Nicolas ’20 (Ripley’s) Falcon Izquierdo played for the Mexican team, showing great determination and commitment.

The full World Rugby Sevens Series will be back in Vancouver in February 2022, and the Women's Rugby Sevens will return to Langford at a date still to be announced. Shawnigan looks forward to reconnecting with our greater community at both of these events and will be in touch with further details in the coming months.
Peter Hebb ’55 (Groves’) - Inter-House Rugby 1951
Peter Hebb ’55 reached out with the following vignette of an Inter-House Rugby competition in 1951: 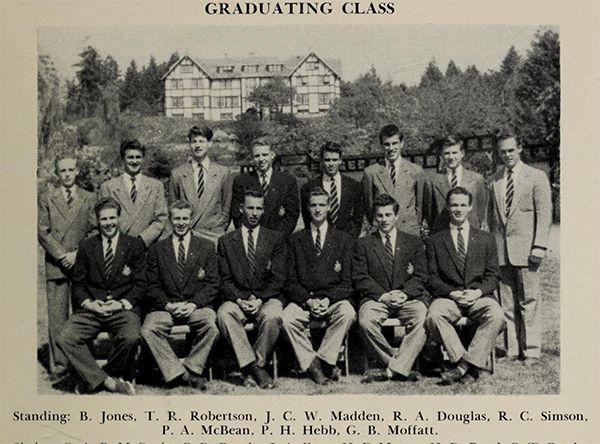 Peter Hebb (back row, second from right) and the graduating class of 1955.

It was a cloudy, cold, November Saturday in 1951. Shawnigan’s operations were losing money. Dormitories, common rooms and changing rooms were all located in the Main Building.

The School’s administration had decided to hold the annual Inter-House Rugby game despite the odds. The then approximately 72 boys were divided into Groves’, Lake’s and Ripley’s Houses, each with about 24 boys ranging between Grades 5 and 13.

The first match, chosen by a draw, was between Lake’s and Ripley’s Houses and was held after lunch. Rather than choosing the 15 largest boys to field the two House teams, the boys decided amongst themselves to field the two teams with players chosen from the full span of ages from Grades 5 and 6 up to Grades 12 and 13. The heaviest player out-weighed the lightest by a ratio of more than 2 to 1.

Headmaster C.W. Lonsdale had arrived in his famous deep blue Packard and perched on his shooting stick on the small escarpment above the field. At the appointed hour, the rugby coach, Derek Hyde-Lay, stood midfield, looking towards the field house, and tweeted his referee’s whistle to summon the players to man the field facing each other. Nothing happened. After the third tweet, with an interval of a minute or more between tweets, the two teams appeared and stepped from the field house all dressed for the first match. After running in-line formations about 30 yards each, the two teams alternated sides running forward as the two lines perfectly scissor-crossed each other.

Each team proceeded to occupy a half of the field and faced the other. The whistle blew and the ball received the usual boot to kick off the match. The ball recipient caught the ball and ran forward, and just before being tackled, kicked the ball backward over his head to be caught by his own full-back. The whistle tweeted, and the referee shouted, “We are here to play rugby, not nonsense. Begin the game again.”

The same play was re-enacted a second time. The whistle blew once more, and the referee summoned the 30 would-be players to locate around him. In a loud voice, he told them all to get changed and go for a run to Raymond’s crossing (downstream from Mason’s store).

The referee then jogged across the field and stood below the Headmaster and some staff spectators. He said: “Sir, they don’t want to play rugby, so I have sent them for a run to get over it.” The Head replied, “Very well: carry on!”

The boys in Groves’ House returned to their common rooms, and within minutes, the referee opened the common room doors and said “You are all part of this. Get changed and all of you go for a run to Raymond’s crossing.”

As the faster Groves’ runners ran down the last hill towards the creek’s bridge crossing known as Raymond’s, high fives were exchanged with the faster Lake’s and Ripley’s runners coming up the hill. 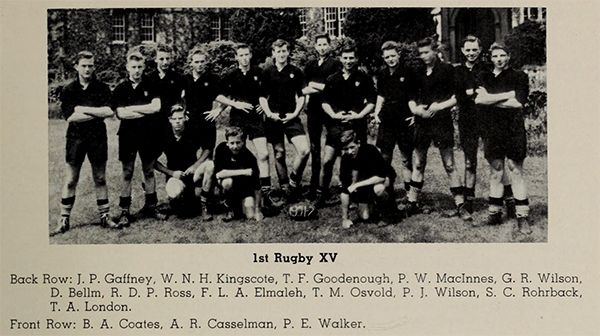 The 1951-52 rugby team which Peter H. stated: “would have included several of the participants in my story.”

In case you missed it: Alumni Profiles

We have recently launched our new Alumni Profile series which shares the stories of Shawnigan alumni that are helping build the ongoing history of our school.

Click here to read all the profiles and to nominate an alum to be featured! 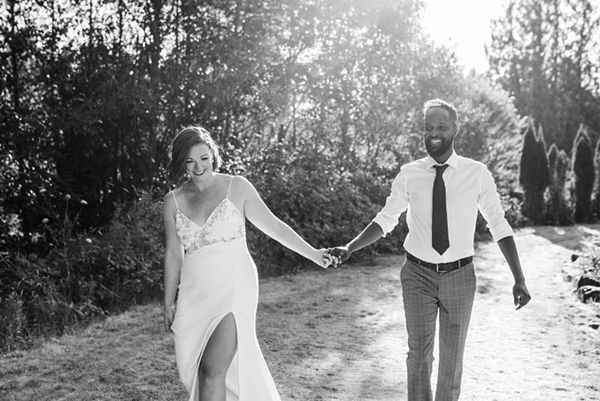 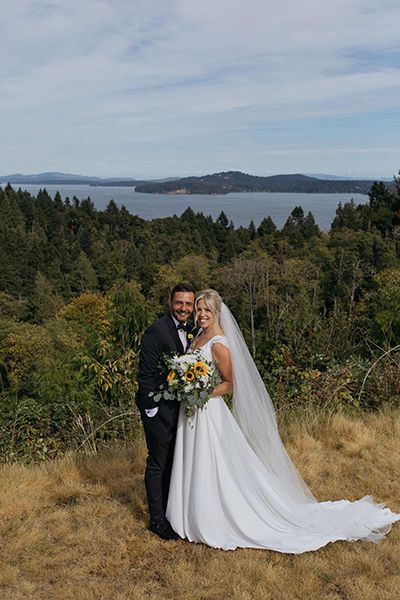 In a ceremony this summer, Madi Dodsworth '10 (Renfrew) married Raymond Lea, and shared the following with us:

“We became engaged the day a global pandemic was announced. Throughout our engagement we planned 3 different weddings due to the changing COVID-19 restrictions. On August 28th we had the wedding of our dreams. We were married at Arbutus Ridge golf course, where we met, with a reception at a private property following. Our closest friends and family were invited to celebrate this magical day with us.”
Back
We acknowledge with respect the Coast Salish Peoples on whose traditional lands and waterways we live, learn and play. We are grateful for the opportunity to share in this beautiful region, and we aspire to healthy and respectful relationships with those who have lived on and cared for these lands for millennia.
1975 Renfrew Road
Shawnigan Lake, BC V0R 2W1
250-743-5516
Shawnigan Lake School is an independent co-educational boarding school for ages 13 –18 on Canada’s beautiful West Coast. Our diverse, interdisciplinary and innovative programming helps shape the next generation of global leaders.